Andrea Abbatista is an Italian actor and director, and a Lynchian DOC. He made his debut on stage in the role of Dr. Treves in The Elephant Man and is now writing a play about Orson Welles. His video-tribute to Twin Peaks is really something!, to put it as Dale Cooper.
I have the honor to present a very first preview of the Lost Poet. He has a symphony of words for us, as stated in the suggestive subtitle. Make yourself comfortable (but not too much) and start the video. Coming up, an interview with Andrea, who speaks among other things, about how this project was born and developed. Are you ready to get back into the Black Lodge?

Poems Between Two Worlds – A Symphony of Words for David Lynch from Andrea Abbatista on Vimeo.

Hi Andrea! Introduce yourself to the readers of davidlynch.it. [Who are you? What do you do? What are your past and future projects?]
First of all, I want to thank you for the rare opportunity you’re giving me.
My name is Andrea Abbatista, I’m an actor from Milan, who occasionally dedicates to directing, my very first big love.
I studied acting with two american teachers from the Actor’s Studio of New York, Richard Gordon and Vincent Ronci Gaeta, collaborator of Stella Adler, with whom I studied the Stanislavsky and Strasberg Method. I also attended training classes with two teachers of the Royal Academy of London. I made my debut back in 1998, with many dreams and aspirations. My next project will be theatrical, I’m writing a play about Orson Welles and his unfinished Don Quixote.

When I opened this website, the first article I published (entitled “Do not watch TV too close”) told about my first approach to David Lynch’s art, the very moment I fell in love with his world. I invited my readers to do the same. Now it’s your turn. When did you met for the first time David Lynch, not the man, but his work? And how did you felt?
I love this question. I have a very funny anecdote, at least for me, because I first bumped into David Lynch’s work “prematurely” and it’s an indelible memory for me. It was 1981, I was about 5 years old, and my father, who imparted to me the passion for movies, brought me to the cinema; there were two options: “Blue Lagoon” and “the Elephant Man”, so he asked me what I did prefer, and I chose “Blue Lagoon”… but my father –who was clearly more interested into David Lynch’s movie- said, “ok let’s go to watch The Elephant Man!”. Worst choice ever for a parent, probably … That movie literally upset me! I wasn’t really afraid of John Merrick’s appearance, it just made me feel so harrowing in pain the way he was treated. I could not see that movie again for many years, for the strong emotions I felt that evening. But growing up, I never lost any of David Lynch’s movies… and I became a great estimator, and a huge fan!
His art, and that also counts for his paintings and music, opens my mind and soul in a way that I cannot describe … and it makes me sense what art in general and also movies should be, free from inhibitions and without any kind of censorship.

How did the idea of ​​the short film born?
It just came out…. somehow…it was somewhere inside of me. I had just read the news that David Lynch and Mark Frost would get back to the world of Twin Peaks. I think it was October 2014, almost two years ago and I was so happy! I couldn’t ever be able even to imagine this! I think it was in that very moment that something happened inside of me. I haven’t had a brilliant career -far from my wishes- for various reasons, but I still have a lot of ideas and haven’t lost the instinct/need to express myself through art. So I just wanted to thank them my own way; bring my happiness out loud of my art (and heart) and share this joy with all the fans… trying even to get my thanks to David Lynch himself , to Mark Frost, the entire original cast and the legendary Angelo Badalamenti and Julee Cruise.
The idea came out instantly, as if it was the logical consequence of my joy. 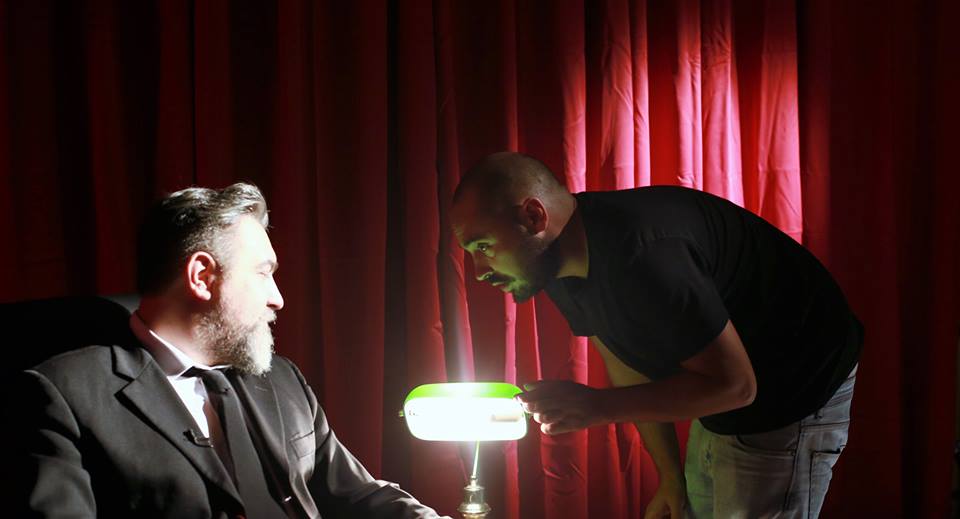 Tell us something about its realization (the set, the lights, the music).
I think that without the right people, you can’t accomplish anything. I proposed the idea to Alessandro Brivio, a talented director of photography, I met on a set in 2012. The idea pleased him right away, in my amazement …and he decided to join the no budget and no profit project.
The second fundamental step came with Andrea Montanelli of Moviechrome Productions in Milan, who provided all the technical equipment and his great heart … My partner then, she was an assistant and a key adviser to the realization of the short movie and to help me keeping my sanity. 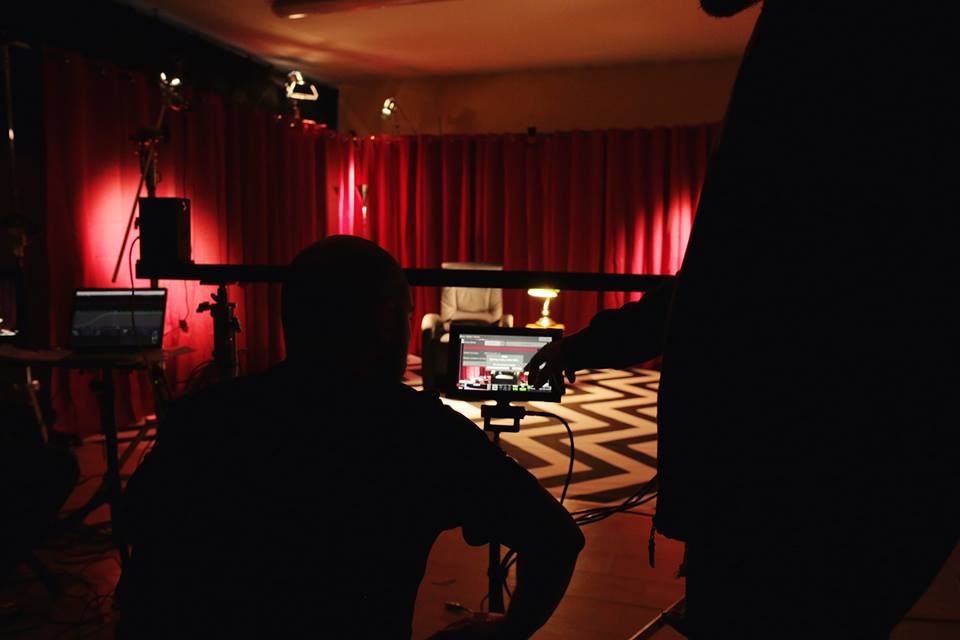 I could not believe it! I’ve always found it hard to involve people willing to work on low budget projects … But in this case, being the tribute about David Lynch, having serious professionals available to collaborate seemed so simple… This too, I believe, is a clue to understand the greatness of Lynch.
The Black Lodge, had to be The set. That limbo in which I wandered for years and where I wanted my “Poet” to get Lost too. So we set it up in the Moviechrome studio. Tents, printed floor, black armchair, lamps and coffee table.. just a few but distinctive items. 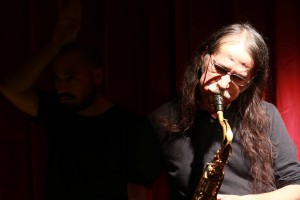 For the post-production phase I could count on wonderful people’s help, Marco Longieri and Malgorzata Polit of Top Digital for the sound mix; Edoardo Ruggini, was in charge of editing… and I’ve been a real pain in the ass! And Gianluca Ghezzi, who immediately caught the mood I wanted, wrote original music and sounds. The only Angelo Badalamenti’s music used is the final sax solo, taken from “Sycamore Trees”. I could not reach the lyricism I had in mind without his music in the final shot! I really hope he will forgive me… 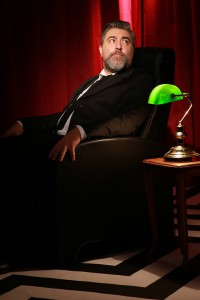 How did you choose the lyrics/words to be performed?
For me it was important to become a means of David Lynch’s words; words full of love, pain, loss, despair, reminiscences and oblivion.
I took 3 songs from the album of Julee Cruise “Floating into the Night”, who made me dream and get back there to Twin Peaks, during the last 25 years: “I Remember”, “The Swan”, and “Into the Night”.
Then “Sycamore Trees” lyrics, because that song and Jimmy Scott’s voice have always moved me deeply. I had the rare opportunity to meet him after a concert in a church, here in Milan … a human being of a rare delicacy and kindness.
And the final part of Mike’s monologue “Fire Walk with Me” could not be missing.
My acting method requires an emotional truth/honesty, which I always try to let flow without any filters. I think that the choice of the lyrics and the placement of the words into the emotional journey of my Lost Poet were more a subconscious path for me.

The strangest and most beautiful thing that came to your mind while you were sitting in the Waiting Room.
The stranger thing was to find myself immersed in a set that I have always loved, to realize a concept born within me, and just to say thanks to David Lynch for getting back behind the camera and for being that complex and extraordinary soul that he is.
I was surrounded by people who loves and just wanted to pay a tribute to the genius of Lynch, through this crazy idea, which I don’t even know if anyone would ever like…
The actual fulfillment of this project is the strangest and most wonderful thing that ever happened to me; when I think about it I still get emotional!

You can choose to be a male and a female character of the original Twin Peaks’ cast. Who are you? And why?
Dale Cooper, for his positive and disruptive energy, despite the difficulties he experienced; for his enthusiasm and contagious curiosity; for his courage and his way of being open to the signs of the universe.
Audrey Horne, for her beauty and sensuality, because she is the counterpart of Dale Cooper, courageous, curious and vulnerable more than what she shows.

Lynch loves the happy coincidences, what of unexpected but in line with the spirit of the work happens on the set, and he incorporates it in the work itself (one example: Killer Bob cheracter). Have you got a story of this kind about the realization of Poems Between Two Worlds – A Symphony of Words for David Lynch (or in your career)?
One of the coincidences I love most is related to my first approach/contact with Lynch’s work, about which I told you before. Its epilogue was in 1998, when I made my theatrical debut with The Elephant Man, in the role of Dr. Treves. I was 22, and a kind of circle was closed.
About “Poems”, the shooting has been done all in one day, and because of the almost complete lack of budget, I couldn’t introduce the tricks that I wanted to. Some of those limits, however, gave me new ideas during the editing process, and have become an integral part of the plot … others are still there tormenting me. 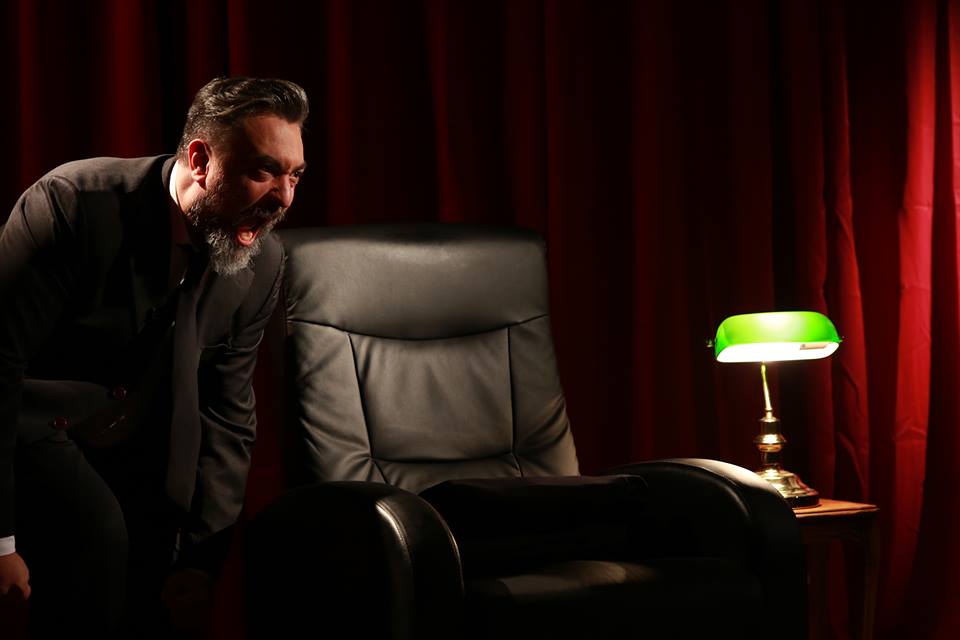 How did you find out that Lynch would be back to Twin Peaks, after 25 years? And how did you feel?
Through the website “Welcome to Twin Peaks”. How did I feel? As Andy seeing the corpse of Laura Palmer wrapped in plastic… unmanageable emotions … but much more pleasant.

Expectations for the new episodes are –rightly- very high and some fear the disappointment. What do you think about it?
Last week, I read on Facebook that many fans were expecting a Twin Peaks trailer. As far as I know Lynch, I think we can imagine that he won’t reveal even one frame of the new season. At least he might show some teaser trailer with that peculiar mood and essence; some of that atmosphere to bring us back there, to those places and among those characters that we love so much. And then, on Monday, here’s a new teaser!… with Lynch, back in Gordon Cole’s role, eating a donut … in silence … What an absolute genius! I know for sure that, whatever he achieved, whatever he will achieve in the future, he will strike and move me on an emotional and subconscious level, as no one else can do … can’t wait for it!

Imagine that Lynch has just seen your tribute and he is reading these lines. You can say what you want to him…
I can’t answer this question… the dreamer who lives inside of me hopes with every fiber of himself that David Lynch can see my tribute and may want to tell something about it… for me it would be a reward for all the years of work and the sacrifices I had to face in life and to keep my dreams alive.
I wrote him a letter, and maybe one day I will have the opportunity to have him read it… who knows? … For the moment I’m trying to hold off the excitement and the hope … but I’m not very good at it.
For now, I really hope that fans, the family I belong since 25 years ago, would enjoy my Tribute.
Matteo, your support, your words were for me pure encouragement! Thanks with all my heart.

Thanks to you, Andrea, for your awesome video!