The last few days have been a roller coaster for Twin Peaks fans (and some people getting sick).

Here is a montage of the most fascinating answers from Sherilyn. We’ll find out more about the negotiation with Showtime, the silence of Kyle MacLachlan, cherry stems and Mulholland Drive.

Lastly, (SPOILER for those who did not finish Twin Peaks yet) we will learn for sure if Audrey survived the explosion…

When Lynch called you to break the news, did he say he was still open to negotiations? Or is he done?
He was not happy about it at all but was exhausted of trying to negotiate, as he shared. He wants to do it right. We ALL do…

Is the cast optimistic that David Lynch would return if his terms are met, or do you see this effort more as an attempt to stop a bastardized version of Twin Peaks?
We feel if his budgetary needs are met, he will….fingers crossed. I feel that DKL always wanted to do it, but he has standards that must be met so you all get the best show possible.

Are talks still happening between Lynch and Showtime? Would you do it without Lynch if it even comes to that? Does Showtime/CBS own the property, preventing it from moving to another network?
yes CBS/Showtime own the property. I feel the statement we are making here is clear. But we pray for solution, and to do something special, again……with integrity and loyalty…stay positive…

Are the cast locked into contract to reprise their roles or will there be a stand against continuing without Lynch?
Only one locked into a contract is Kyle. Seems a breach to me as all the press clearly stated “DKL TO DIRECT ALL 9 EPISODES”.

Would you like to give life to Audrey again?
I would die to but only with David and all our originals… and them some spicy new babies.

SPOILER Did Audrey survive the explosion?
Yes. Don’t know HOW she got out, cinema magic. But DKL assured me I was not gonna be dead…..he only kills poor Sheryl, again and again…9 lives.

Do you know anything about the Mark Frost novel “The Secret Lives of Twin Peaks”? Have you read it yet or would you like to? What do you think of the idea of the book overall?
I don’t know about it to be honest….sounds good to me…

Is Mark Frost locked into contract as Kyle? Do you know something about that? Mark is so silent.
Silence can speak volumes. Lets pray it all comes back together.

Does anyone have a clue what is going on with Donna’s character? She seems awfully quiet amidst this.
None of us know, except Kyle who read all the scripts.

What do you think of starting a Kickstarter-type crowd funding effort to raise money?
I feel we need to heal what they were already working so hard on…but thank you for that kind of commitment…wow…

Do you wish that you were in Fire Walk With Me now that it has become a classic? In the last few years people have really understood this film. What are your thoughts on your decision not to be in it ?
I was already signed to film Of Mice and Men, that is the reason I was not in the film. I simply could not be in two places at once. I don’t regret Of Mice and Men. And DKL said they cannot replace Audrey…..I am a lucky girl……..

I read recently that Mulholland Drive was originally meant to be a spin off series for Audrey going to Hollywood. What do you think of the idea? Did David ever discuss this with you?
That is true. DKL and his agent took me and my agent to dinner and pitched the idea between season 1 and season 2…

What was it like kissing Billy Zane? he certainly has full lips.
He is not my type….

Do you think a relationship between Cooper and Audrey would have taken the storyline in other directions? Did Kyle`s veto make the writers change anything?
Of course it would have taken us in a different direction. But it is all the past. Its a new day. And maybe they will end up together…  I always thought they should be together.

Hoy did you come to play Audrey? Did you audition for the part?
I had a 15 minute meeting with my beloved DKL and he wrote me AUDREY>>>>> She was not in the original script.

Who’s your favourite TP character? who would you have liked to have played if you hadn’t played Audrey?
I was BLESSED enough to have Audrey Horne written for me….. How could I want anything else….except Agent Cooper.

Any word about filming in Snoqualmie versus L.A.? Budgetarily, might this be one of the sticking points?
Definitely on location and refurbishing some of our locations!!!!!!!!!!!

Audrey’s famous party trick, but do you have a party trick, if so what is it?
I am not nearly as cool as Audrey Horne…no tricks here…..well I can roll a joint really fast….lol

Can you still do the Cherry trick?
Didn’t do it when we filmed. Thought it was silly….what did I know. Mark said people do it in college but I am a high school drop out so what do I know. But my longtime agent Cynthia Campos Greenberg and I got locked out of our hotel rooms in our pajamas, in New York City and hung out at the bar learning the technique. Simply, a long stem that you make pliable in your mouth.

What was your favorite scene to film on Twin Peaks?
Praying for my special agent to save me…and dancing… The joy in the pilot as she pulls the pencil out of the coffee cup…

That anachronistic dance you did at the Double R…is that something you just made up on your own? I loved it!!
DKL rewrote that scene right before we filmed it. Then said at the end you go get up there and groove to Audreys theme…….I just do what he tells me to do…I trust him completely. I only want to work With David and his daughter Jennifer…..

What is “Twin Peaks” ?
Two mountains, Womens breasts and my eyebrows DKL said to me once.

Your brows are phenomenal. Are they natural, or do you fill them in?
That is their natural shape, and yes I fill them in, all the best people do….lol

How was your life after Twin Peaks? What changed in your life?
The best thing is having my two sons. Myles is 21 and I have Christian who is 7…… Children are the beauty of the world.

I know you love tennis, what do you think of Roger Federer?
He is amazing. But my heart belongs to Rafa!!!

Who’s the wackiest cast member of Twin Peaks?
My favorite is the beloved Jack Nance, next to DKL of course.

Have you ever thought about doing voice-over work for like cartoons or something similar? Would love to hear you voice a character for Adventure Time.
I would love to do that….no make up…lol

Is it Ok I Stole your pages picture?
Ok….just dont steal my soul! 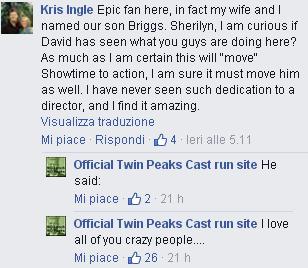 I am curious if David has seen what you guys are doing here? As much as I am certain this will “move” Showtime to action, I am sure it must move him as well. I have never seen such dedication to a director, and I find it amazing.
He said: I love all of you crazy people….

Are there any updates on negotiations with Showtime?
Not yet. There is not a Twin Peaks without DKL. And MF. And everyone else….Pray for it to come together. Spread the word. Like our page. Share the video. #SaveTwinPeaks.